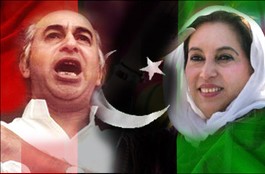 President Asif Ali Zardari copied a message on the event as PPP Co-chairman, asking the democratic forces to get ready for the Upcoming Elections Which is expected in May 2013.

PPP was established on this day in 1967 in Lahore. It has ruled the country 3 times in the past and was voted into power for the fourth time in 2008. Its present government is set to complete a five-term in March to become the first elected government to run its full tenure.

The Party Chairman Asif Ali Zardari promised that PPP Would win the upcoming Election 2013 and make PPP Governments in all provinces and in also Punjab where the Pakistan Muslim league –N is ruling under former Prime minister Nawaz Sharif. Cite

Political opponents dismiss the claim as a pipe-dream, citing what they call the dismal track record of PPP government during the past four and a half years, marked by crippling energy shortage, alarming deterioration of law and order, insurgencies in two provinces, crushing inflation and economic decline.

But the PPP says the country has achieved additional agricultural production during its tenure, the provinces have been empowered, and reconciliation politics has helped the further democratic process, constitutional distortions made by military dictators rectified by transferring key powers from presidency to parliament.

In his message Zardari said: “Let us vow once again today that we will continue to work for the strengthening of democratic institutions as envisioned by Shaheed (martyr) Zulfikar Ali Bhutto and Benazir Bhutto and for which they laid down their lives.”

He said the Party has strengthened the federation and has been a strong rampart against the forces which tried to demoralize the association.

PPP Foundation Ceremony Was held by PPP throughout the country and to mark the vision of its founder achievement to demoralize the association.