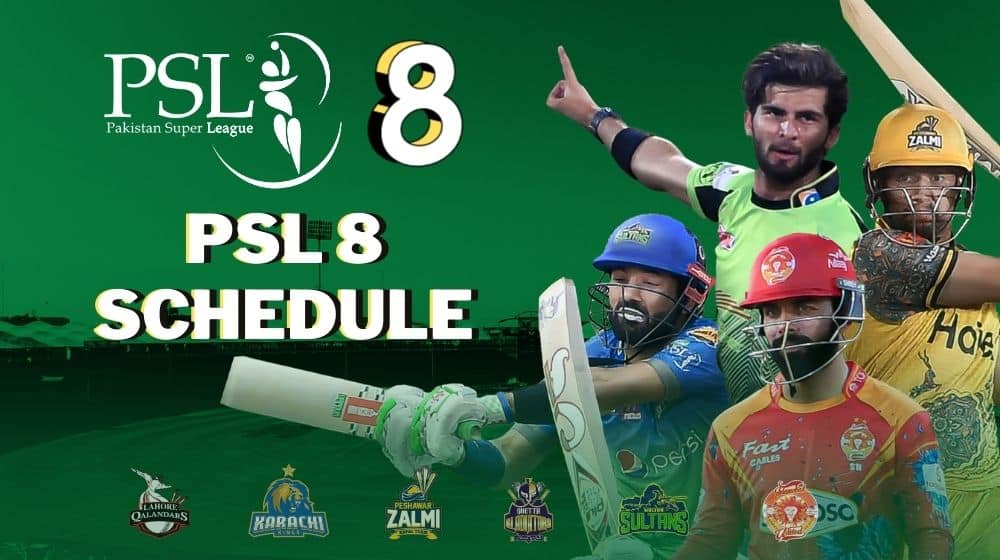 Pakistan Super League season eight has come and cricket fans are so crazy to know HBL PSL 8 schedule 2023. Here on this page were are going to share the PSL Schedule 2023 of all matches including venues and dates.  Last year Lahore Qalandars was the winner and the runner-up team was Multan Sultans so this year the first battle will come between these two teams at Multan Cricket Stadium on  Monday, 13 February.

Karachi, Lahore, Multan and Rawalpindi will share between them the 34-match tournament of the Pakistan Super League, and the event schedule has been designed in such a way that the four home sides will each play five matches in front of their fans and supporters – one against each side.

The HBL PSL 8 will be held in two legs, with Multan Cricket Stadium and National Bank Cricket Arena splitting matches from 13-26 February before the action shifts to the Gaddafi Stadium and Pindi Cricket Stadium, where the matches will be played from 26 February to 19 March. This includes the Qualifier, two Eliminators and the final at the home of Pakistan cricket from 15-19 March.

The soft launch of the Pakistan Women’s League will also take place during the HBL PSL 8, when three exhibition matches will be played in the lead-up to the men’s matches in Rawalpindi on 8, 10 and 11 March. The two women’s sides are expected to comprise leading local and foreign players, details of which will be announced in due course.

Chair of PCB Management Committee, Mr Najam Sethi: “I am delighted to formally confirm the schedule of the HBL PSL 8, which will allow the Pakistan Cricket Board and the six franchises to start firming up and finalising their respective event plans and objectives.

“The HBL PSL 8 will be a massive event for the PCB, taking place at the four iconic venues with the world’s best T20 cricketers in action. We aim to make the HBL PSL bigger, better and stronger than ever before, with the overarching ambition to make it the first-choice event for leading T20 cricketers.

“Each of the six sides will enter the HBL PSL 8 with lots at stake. There will be no question about the quality of cricket that will be played in over 34 days of action-packed cricket. I am hoping the HBL PSL will once again live up to its expectations of unearthing and identifying future stars who will not only challenge the established household names in this edition but will go on to represent Pakistan.