It is part of Sikh religious belief that the spirit of Baba Nanak‘s sanctity, divinity and religious authority descended upon each of the nine subsequent Gurus when the Guruship was devolved on to them.

Guru Nanak  Was born on 15 April 1469 and now celebrated in Pakistan as Prakash Divas of Guru  Nanak Dev , At Nankana Sahib. his birthplace is marked by Gurdwara Janam Asthan. His father, Kalyan Chand Das Bedi, popularly shortened to Kalu Mehta, was a patwari (accountant) for crop revenue in the village of Talwandi, employed by of a Muslim land lord of that area, Rai Bular Bhatti.

Nanak’s mother was Tripta. He had one elder sister, Bibi Nanaki who became a spiritual figure in her own right.

It is part of Sikh religious belief that the spirit of Guru Nanak’s sanctity, divinity and religious authority descended upon each of the nine subsequent Gurus when the Guruship was devolved on to them.

Nanaki married Jai Ram and went to his town of Sultanpur, where he was the steward (modi) toDaulat Khan Lodi, the eventual governor of Lahore. Nanak was attached to his older sister, and, in traditional Indian fashion, he followed her to Sultanpur to live with her and her husband.

Nanak also found work with Daulat Khan, when he was around 16 years old. This was a formative time for Nanak, as the Puratan Janam Sakhi suggests, and in his numerous allusions to governmental structure in his hymns, most likely gained at this time.

Commentaries on his life give details of his blossoming awareness from a young age. At the age of five, Baba Nanak is said to have voiced interest in divine subjects. At age seven, his father, Kalu Mehta, enrolled him at the village school as was the custom.

Notable lore recounts that as a child Guru Nanak astonished his teacher by describing the implicit symbolism of the first letter of the alphabet, which is an almost straight stroke in Persian or Arabic, resembling the mathematical version of one, as denoting the unity or oneness of God. Other childhood accounts refer to strange and miraculous events about Nanak witnessed by Rai Bular such as a poisonous cobra being seen to shield the sleeping child’s head from the harsh sunlight.

The earliest biographical sources on the life of Guru Nanak recognised today are the Janamsākhīs (life accounts) and the vārs(expounding verses) of the scribe Bhai Gurdas. The most popular Janamsākhī were allegedly written by a close companion of the Guru, Bhai Bala. However, the writing style and language employed have left scholars such as Max Arthur Macauliffe certain that they were composed after his death.

Gurdas, a purported scribe of the Gurū Granth Sahib, also wrote about Nanak’s life in his vārs. Although these too were compiled sometime after Nanak’s time, they are less detailed than the Janamsākhīs.

The Janamsākhīs recount in minute detail the circumstances of the birth of the guru. The Janamsakhisstate that at his birth an astrologer, who came to write his horoscope, insisted on seeing the child. On seeing the infant, he is said to have worshipped him with clasped hands and remarked that “I regret that I shall never live to see young Guru Nanak as an adult.” One day Guru Nanak went to wash in the river and suddenly disappeared. One of his beloved friends thought that Baba Nanak was drowning because he saw a whirlpool in the place where Nanak was bathing.

So Mardana swam to where he thought he was drowning but didn’t feel anything – just the depths of the river. He worried and spread rumours that Nanak had been taken away by the river. Two days later there was still no sign of Guru Nanak and everybody in the village worried if Nanak was ok or not. On the third day, Nanak mysteriously walked out of the river and to everyone’s relief. Everybody wondered what happened. Guru Nanak said “I spoke to God and he said there is no Muslim or Hindu” 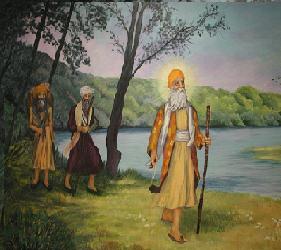 Rai Bular, the local landlord and Guru Nanak’s sister Bibi Nanaki were the first people who recognised divine qualities in the boy. They encouraged and supported him to study and travel. Sikh tradition states that at around 1499, at the age of 30, he had a vision. After he failed to return from his ablutions, his clothes were found on the bank of a local stream called the Kali Bein. The townspeople assumed he had drowned in the river; Daulat Khan had the river dragged, but no body was found.

Three days after disappearing, Guru Nanak reappeared, staying silent. The next day, he spoke to pronounce, “There is neither Hindu nor Mussulman (Muslim) so whose path shall I follow? I shall follow God’s path. God is neither Hindu nor Mussulman and the path which I follow is God’s.” Guru Nanak said that he had been taken to God’s court. There, he was offered a cup filled with amrit (nectar) and given the command “This is the cup of the adoration of God’s name. Drink it.

I am with you. I bless you and raise you up. Whoever remembers you will enjoy my favour. Go, rejoice of my name and teach others to do so. I have bestowed the gift of my name upon you. Let this be your calling.” From this point onwards, Guru Nanak Jayanti  is described in accounts as a Guru, and Sikhism was born.

Although the exact account of his itinerary is disputed, he is widely acknowledged to have made four major journeys, spanning thousands of kilometres, the first tour being east towards Bengal and Assam, the second south towards Tamil Nadu, the third north towards Kashmir, Ladakh, and Tibet, and the final tour west towards Baghdad, Mecca and Medina on the Arabian Peninsula.

Guru Nanak crossed into Arunachal Pradesh and visited most of the part.

First while going to Lhasa (Tibet) he passed through Tawang after crossing from Bhutan and entered Tibet from Samdurang Chu. He returned from Lhasa and went to the famous monastery Samye and entered Pemoshubu Menchukha in Arunachal Pradesh. He meditated for some time at this location.

From Menchukha he went back to Tibet, brought the residents of Southern Tibet and got them settled in Menchukha. Thereafter through Gelling and Tuiting he proceeded to Saidya and Braham-Kund, before entering the state of Assam again. Guru Nanak is the founder of the Sikh religion.

Guru Nanak was married to Mata Sulakhni at about 16 years of age. His marriage to her took place on the town of Batala. The marriage party had come from the town of Sultanpur Lodhi. The couple had two sons, Sri Chand and Lakhmi Chand.

Guru Nanak appointed Bhai Lehna as the successor Guru, renaming him as Guru Angad, meaning “one’s very own” or “part of you”. Shortly after proclaiming Bhai Lehna as his successor, Guru Nanak Dev died on 22 September 1539 in Kartarpur, at the age of 70.

Guru Nanak’s teachings can be found in the Sikh scripture Guru Granth Sahib, as a vast collection of revelatory verses recorded in Gurmukhi.

From these, some common principles seem discernible. Firstly a supreme Godhead who although incomprehensible manifests in all major religions, the Singular “Doer” and formless. It is described as the indestructible (undying) form.

Guru Nanak describes the dangers of the Egotism (haumai- “I am”) and calls upon devotees to engage in worship through the word of God (Naam, implies God, the Reality, mystical word or formula to recite or meditate upon (shabad in Gurbani), divine order (hukam) and at places divine teacher (guru) and guru’s instructions) and singing of God’s qualities, discarding doubt in the process.

However, such worship must be selfless (sewa). The word of God, cleanses the individual to make such worship possible. This is related to the revelation that God is the Doer and without God there is no other.

Guru Nanak warned against hypocrisy and falsehood saying that these are pervasive in humanity and that religious actions can also be in vain. It may also be said that ascetic practices are disfavoured by Guru Guru Nanak Jayantiwho suggests remaining inwardly detached whilst living as a householder.

Through popular tradition, Guru Nanak’s teaching is understood to be practised in three ways:

Vaṇḍ Chakkō: Sharing with others, helping those with less who are in need

Kirat Karō: Earning/making a living honestly, without exploitation or fraud

Guru Nanak put the greatest emphasis on the worship of the Word of God (Naam Japna). One should follow the direction of awakened individuals (Gurmukh or God willed) rather than the mind (state of Manmukh- being led by Self will)- the latter being perilous and leading only to frustration.

Reforms that occurred in the institution and both Godhead and Devotion, are seen as transcending any religious consideration or divide, as God is not separate from any individual.

Guru Nanak was moved by the plight of the people of world and wanted to tell them about the “real message of God”. The peoples of the world were confused by the conflicting message given by priests, pundits, qazis, mullahs, etc. He was determined to bring his message to the masses; so in 1499, he decided to set out on his sacred mission to spread the holy message of peace and compassion to all of mankind.

It is believed that Guru Nanak is the second most travelled person in the world; most of his journeys were made on foot with his companion Bhai Mardana. He travelled in all four directions – North, East, West and South.

The founder Sikh Guru is believed to have travelled more than 28,000 km in five major tours of the world during the period from 1500 to 1524. The record for the most travelled person is held by Ibn Battuta of Morocco.

Guru Nanak saw the world suffering out of hatred, fanaticism, falsehood and hypocrisy. The world had sunk in wickedness and sin. So he decided that he had to travel and educate and press home the message of Almighty Lord. So he set out in 1499 on his mission for the regeneration of humanity on this earth.

He carried the torch of truth, heavenly love, peace and joy for mankind. For 1 year he spread his message of peace, compassion, righteousness and truth to the people in and around his home.

Then in 1500, he embarked on his Divine Mission and went towards east, west, north and south and visited various centers of Hindus, Muslims, Buddhists, Jainis, Sufis, Yogis and Sidhas. He met people of different religions, tribes, cultures and races. He travelled on foot with his Muslim companion named Bhai Mardana, a minstrel.

His travels are called Udasis. In his first Udasi (travel), Guru Nanak covered east of India and returned home after spending about 6 years. He started from Sultanpur in 1500 and went to his village Talwandi to meet and inform his parents about his long journey.

His parents wanted their young son to provide comfort and protection for them in their old age and so they told him they would prefer it if he did not go. But he told them that the world was burning in the fire of Kalyug and that thousands and thousands were waiting for the Divine message of the Almighty for comfort, love and salvation.

The Guru, therefore, told his parents, “There is a call from Heaven, I must go whither He directs me to go.” Upon hearing these words, his parents agreed and gave their blessings. So Guru Nanak started his mission and the roots of Sikhism were laid down first towards the east of India.