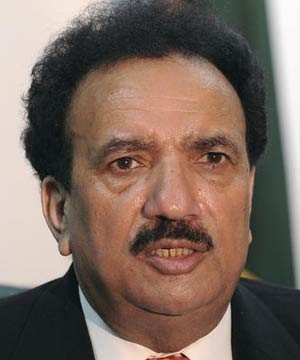 Rehman Malik the Interior minister has said that all resources would be used to fight the threat of terrorism in Islamabad and other areas of Country.

With Media Briefing Rehman Malik said that all those criticizing him earlier were now in full agreement with his decisions concerning his steps to control terrorism during 09th and 10th Muharram.

He said that government of Balochistan had requested for stop of mobile services, but it was refused, while Punjab also requested shutting down of services in Lahore, Rawalpindi, Jhang, Multan, Rahim Yar Khan, Faisalabad, and Gujranwala.

He cautioned that as such the decision of temporary closure of mobile phone services was not taken arbitrarily, but rather after complete consensus with all Provincial governments.

“90% of bombings are being carried out through the use of mobile phones, and all such record is also available”, he said, adding that bombings carried out during past five days were personally reported by intelligence agencies, who have been advised to keep a strict vigil; especially during 09th and 10th Muharram.

Disclosing that even threats had been hurled at him (Rehman Malik), he declared that he was least afraid of anybody.

“If the need a rose even Army could be summoned to launch an all-out operation, irrespective of any affiliations, in order to protect lives and assets of citizens” he expressed.

He also appealed to citizens to help assist the government’s efforts to curb terrorism, in order to avoid any tragic incident(s).

He also questioned the existence of Hakeem ullah Mehsud, challenging the Taliban leader to expose him, if he (Hakeem ullah) was really alive.

Meanwhile talking to media on Friday, he also refused the claims of the Taliban regarding the Wednesday bombings, holding “some third element of being responsible for these bombings, over which I am investigating”, he stated.

It is relevant to note that Rehman Malik had earlier claimed the killing of Hakeem Ullah Mehsud twice, but was confirmed wrong by Hakeem Ulla.