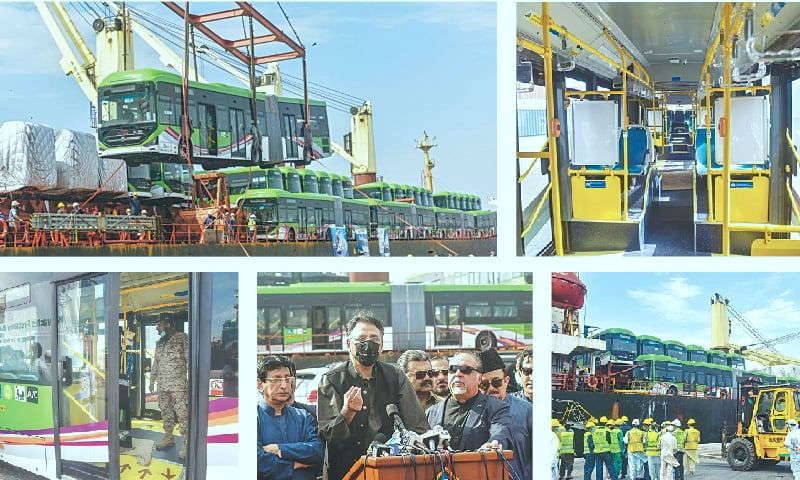 The first batch of Green Line buses has arrived in Karachi city from China on Sunday 19th of September 2021 proving the Federal government project for the best needs of Karachi citizens.  After the passage of 40 years, a young girl incident drastically changes the political scenario in Karachi.  Federal Minister of Planning and development Asad Umar while addressing at a ceremony held at Karachi post upon delivery of buses worth Rs 27 billion said that first time in Pakistan Karachi is getting a modern transport system. It is one of the mega projects of federal government green line projects in Pakistan while four other mega-projects are underway for Karachi city transport system recovery and making it on modern techniques.

Governor of Sindh Imran Ismail was also present at the event and both representatives of the federal government said that it is a milestone of this government by giving transport package to the provincial capital of Sindh province. They further said that the city which gave most of the taxes had been deprived of a modern transport system in the past.

This was the first batch of 40  green buses and another delivery will arrive Pakistan in next month, these 80 buses will cover a 22 km distance from Surjani town to Gurumandir and Numaish Phase-I aiming modern transport system in Karachi. These buses would be functional within 2 months as software installation and drivers training is to be awaited while track and stations have already been completed.

Asad Umar the federal Minister also said that Karachi Circular Railway (KCR) project is on the final approval stage which would provide a transport facility up to one million passengers and initially catering for about 450,000 passengers and three more projects of big roads on Orangi nullah, Gujjar nullah and Mehmoodabad nullah are expected to complete very soon.