Do you Know ! What is Hadith in Islam?

Every Muslim want to know that What is Hadith in Islam and its importance in our life. Islam is a complete way of life. Muslims   have belief on Prophet Muhammad S.A.W as the last prophet of God (Allah Almighty). In Islamic Religion a person who is a follower of Prophet Muhammad and believes that there is only one God (Allah) in this Universe and is the follower of Quran is called a Muslim. Quran is the best book in Islamic books and in the history of the world… It gives us all and everything which we need in our daily life and on every aspect of life. Holy Quran tells us about the complete way of life. After Holy Quran the second most important asset in Islam is hadith (Hadees). If you want to come to know that what is hadith in Islam than here we give you the meaning of hadith in Islam. 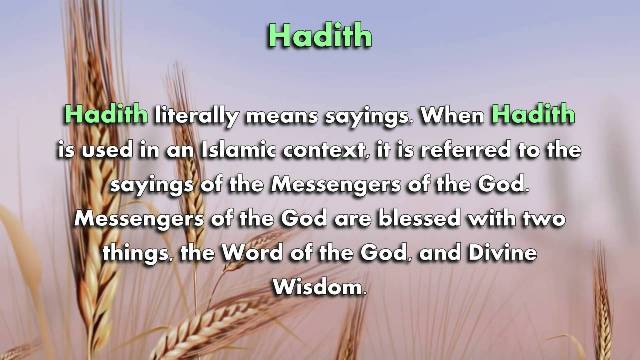 What is hadith in Islam?/Quran and Hadith

The Hadith is the record of the sayings of the Holy Prophet Muhammad (S.A.W). The sayings and conduct of Prophet Muhammad (S.A.W) constitute the Sunnah. The Hadith has come to supplement the Holy Qur’an as a source of the Islamic religious law. You may search some best quran hadith in english and 40 hadith of prophet muhammad that can assist you to find some more information.

Hadith or Hadees has legitimate role   after Quran.  Hadith Qudsi is the sub-category of hadith which has words of Allah Almighty and expressed by Muhammad S.A.W.  After Quran hadith Qudsi has next most important religious asset and religious law of Islam.

How many books are in the hadith?

There are several hadith books in Islamic books Library which gives us the teachings of Islam for complete way of life but for every Firqa   there are total six recommended books   which are known as Kutb us-Sittah. The names of these six Islamic hadees books are Sahih al-Bukhari, Sahih Muslim, Sunan an-Nasa’i, Sunan Abi Dawud, Jami at-Tirmidhi, Sunan Ibn Majah and Muwatta Malik.

What are the Hadith texts?

In Islam, the sacred text called the “Hadith,” which is Arabic for “narrative” or “report,” is a record of Islamic tradition: it is a record of the words and deeds of the prophet Muhammad, his family, and his companions. It is the second most important text in Islam next to the Quran.

Muslims scholars have their preaching of Islam in the light of Quran and Hadith (Hadees). Muslims first should read holy Quran and then understand   it and after Quran he should go to Hadees e Nabi s.a.w.Today science is discovering universe but Islamic book Holy Quran has gives us all in Quran.  In this article I tried little bit to show you meaning of hadith and what is hadith in Islam, Hadees Qudsi and total book of hadith.  Please comment us if you have got something new by reading this article.

From theses some words you might know best What is Hadith in Islam and how w can change our life from sayings of our Prophet Hazrat Muhammad (PBUH). So be sure that we are working and acting like Hadith in our life.