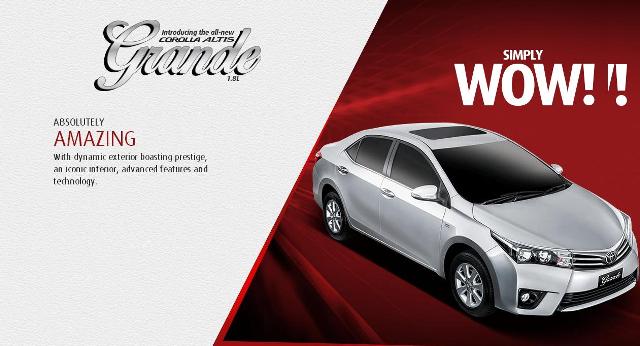 KARACHI: Indus Motor Company (IMC) has started new delivering of  Toyota Corolla Altis Grand for  its customers ahead of Eid, a statement said  on Friday.

The new Model of the Toyota’s immensely popular Sedan Corolla was introduced by IMC on July 15  2014 with  the argue of all nationwide dealership persons.  IMC started new delivery model Toyota corolla  against the order  form July 21.

The new model has received an amazing  positive response, with buyers rushing to Toyota showrooms to book their new model vehicles in advance, given that the demand for vehicles is typically subdued in the month of Ramazan, the statement said.

According to a leading Toyota dealer, the new Corolla Altis Grand t has received plaudits owing to certain unique features introduced first time in the market.

New Toyota Corolla Atlis Grand Specs such as 7 speed Continuous Variable transmission, that ensures smooth and swifter transmission, the Paddle type gear shifting found in sports cars and a state-of-the-art Wifi enabled in-car infotainment system, have earned strong interest from the customers, which is evident from the heavy footfall at the showroom, it said.

Another dealer said that the reintroduction of a newer, more fuel efficient 1800CC engine that delivers superior performance and greater fuel economy has attracted more and more people towards this newer and relatively bigger engine size.

Ali Asghar Jamali, chief operating officer of IMC, said: “It is heartening to see the overwhelming response to the New Corolla Grande.”

“We thank our customers for their patience and hope that we continue to delight them with our products and services. The Corolla Grande has been developed keeping in mind the customer’s safety, comfort and utility.”

He said: “In order to facilitate them, we have started accepting orders on partial payment as per the standard terms and conditions.”