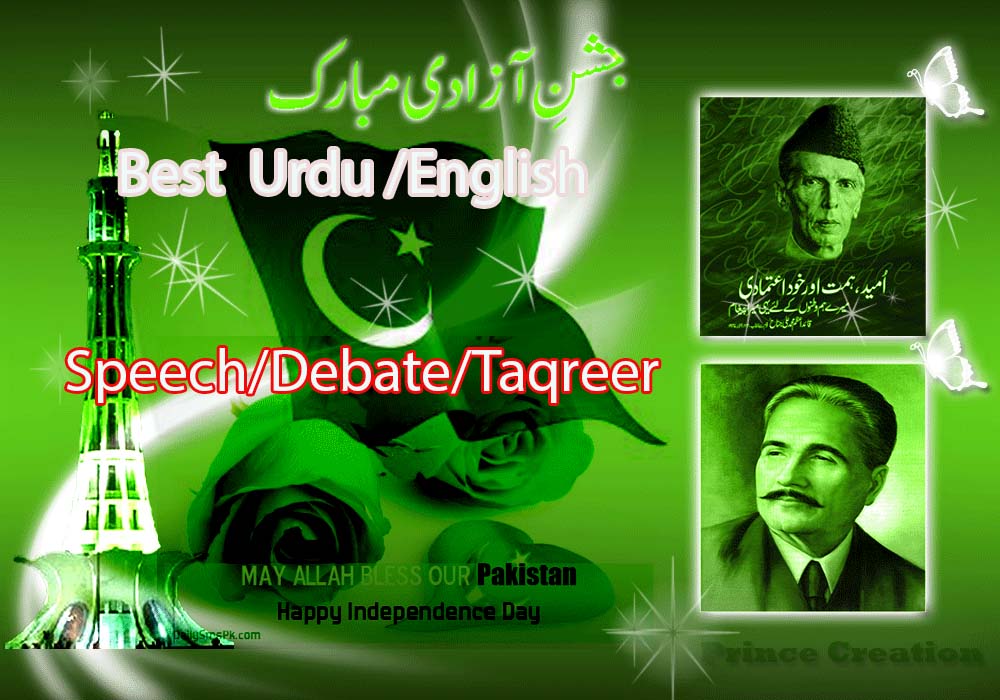 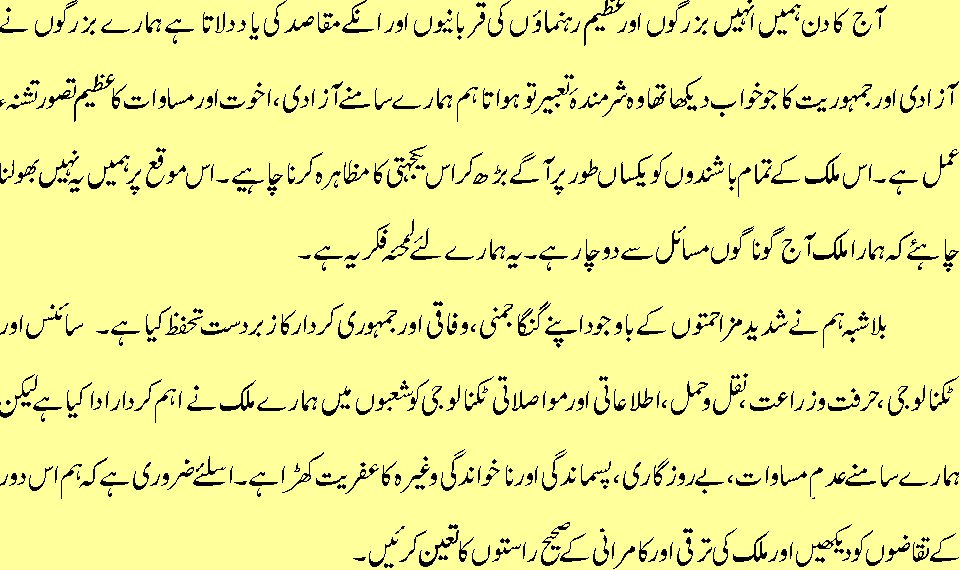 14 august speech in urdu and English Speech for Independence Day

Who knew that day.
Of 14th of August,
Will tell the world in a way,
That both East and West,
Would come to know that there stands, A country named Pakistan,
A lovely place, with sacred lands.
And a home for a Musalman,
A Quaid’s effort, a Poet’s dream,
And a struggle of a human flood,
A new beginning beyond a stream,
Filled with Muslim blood.

14th August is a common date like other dates of the English calender for nations but for the Pakistani nation, this date is the most remarkable day in the history of Pakistan. Pakistan came into being on 14th August according to the English calendar while according to the Islamic calendar, it was the 27th of Ramadan when Allah blessed Muslims with the pious homeland. 27th Ramadan has religious importance as the revelation of Holy Quran on Holy Prophet {P.B.U.H.} finished this month. The word “ Pakistan “ is made by combining two words “ pak “ and “ stan “. Pak means pious and stan means homeland. Therefore, the meaning of Pakistan is the homeland of pious people.

Names of people like Muhammad Ali Jinnah, Allama Iqbal, and Sir Syed Ahmad Khan are always written in golden words in the history of Pakistan. Muhammad Ali Jinnah is also known as Quaid-e-Azam is the real founder of Pakistan. Allama Iqbal, who excited Muslims to earn their own nationality and name in the world. Sir Syed Ahmad Khan, who brought Muslim nation forward and made schools and colleges for Muslims so that they may come to know how to fulfill the latest demands of the advanced age.

Quaid e Azam the Father of Nation said for the people of Pakistan in his address in Ziarat that “Making of Pakistan was a difficult task; I could never have accomplished it alone. It was the Roohani Faiz of Rasul Allah(sa) that Pakistan came into Being. Now it is the responsibility of every Pakistani to make it an example of Khilafat-e-Rashida” [Ziarat, 1948].

We must celebrate 14th August as it is our independence day. We should celebrate 14th August by thanking to Allah by going to Mosques instead of celebrating this day in music parties this day. We should celebrate this day by brightening our hearts with the light of the teachings of Islam. It is not an important fact whether we lighten homes or not with lights. Its time to be practical and show our love towards our dear homeland by doing something which may bring Pakistan on the road of success without waiting for anyone who may join us.

Jinnah in His first broadcasting for the nation of Pakistan “August 15 is the birthday of the independent and sovereign state of Pakistan. It marks the fulfillment of the destiny of the Muslim nation which made great sacrifices in the past few years to have its homeland.”

Outlining the purpose of the creation of Pakistan, Quaid-i-Azam said in a speech to the officers of the Defence Service on October 11, 1947, that the establishment of Pakistan was only a “means to an end and not the end in itself. The Idea was that we should have a state in which we could live and breathe as free men and which we could develop according to our own lights and culture and where principles of Islamic social justice could find free play.” 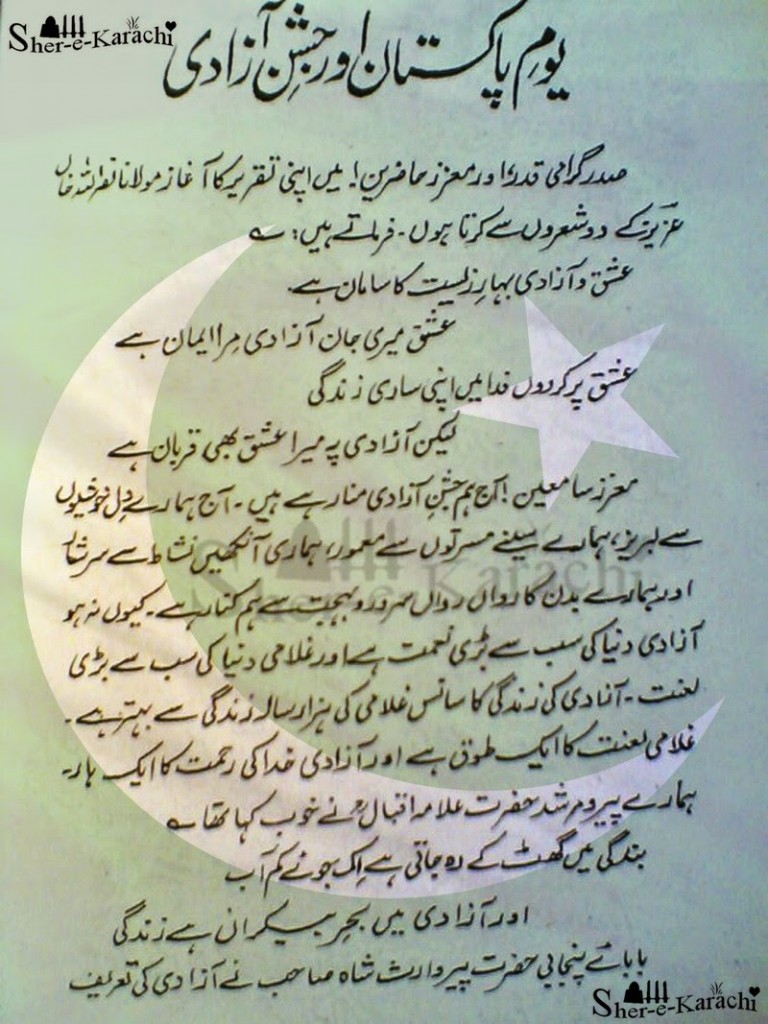 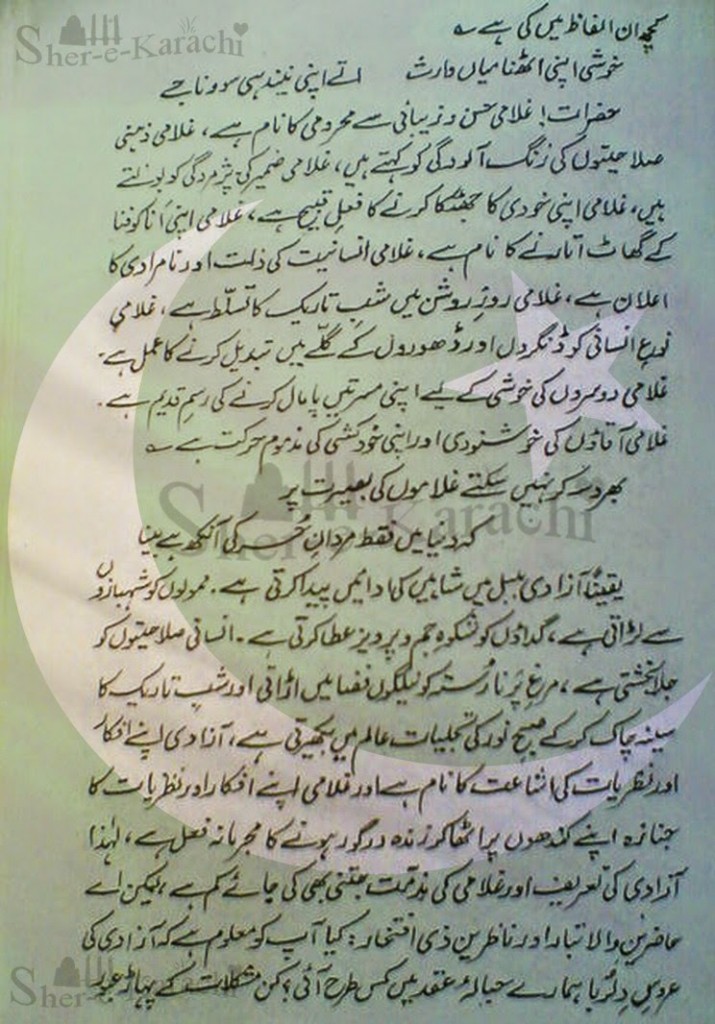 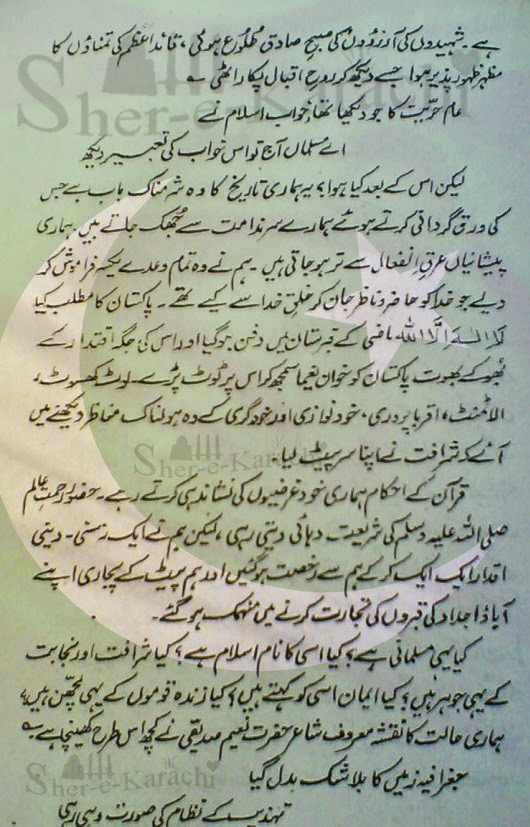